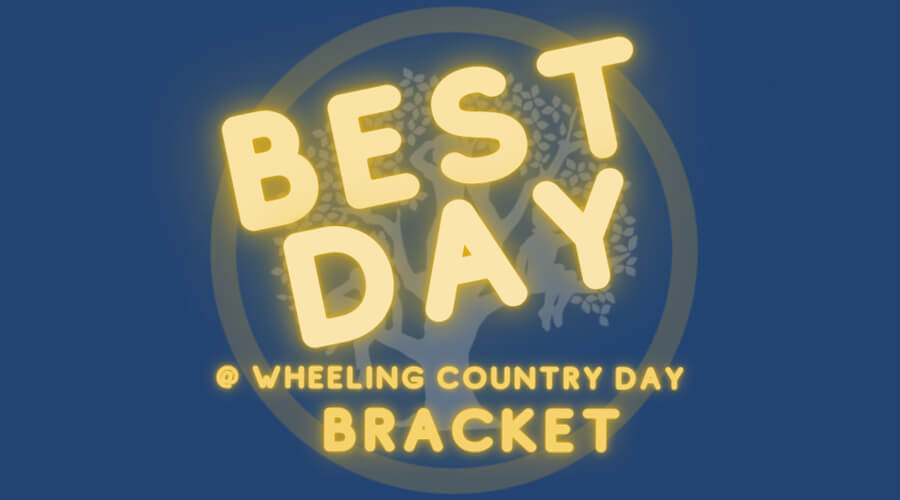 Mr. Hladek sure found himself excited for another first day of school, which inevitably made him think of all the fun times that lie ahead. Then he said, (probably aloud to himself) ‘I wonder what days we get most excited for at Wheeling Country Day School? What are our Best Days?’

Well folks, even though I could’ve sworn Memorial Day was just last week, somehow another first day is in the books, filled again with smiling fifth graders opening car doors and students, new and old, bounding to their new classrooms, indoors and out! Filled also, of course, with unforeseen hiccups like a consistently inconsistent traffic pattern (*cough* Wheeling Water Dept *cough*) and a most popular construction crane in the alley, another year has officially begun. Learn Everywhere is a motto, of sorts, this year at WCDS, and we’re encouraging the kids to learn something new in all life’s moments, large or small. (*See Liz’s Learn Everywhere Head Space welcoming us back to campus here*)

So with that in mind, sure preschool had things planned for today, but why not start the whole shebang out with a Learn Everywhere hiccup that resembles a living breathing Blippi episode?

Speaking of moments big and small at WCDS, the phrase Best Days can mean different things to different people, depending when and how you experienced them. With people on this campus from age 2 to 92, folks taking their first steps here today to teachers and students and parents rooted here for years, we have a whole range of perspectives to enjoy. And as I personally measure years here in balloon launches and summer camps, graduation speeches and first day photos, field days and musicals I’m begrudgingly (yeah right) cast in, I was pleased to share with my friends here a love for the little things, the sparkling moments as Liz likes to say.

When asked their Best Days, I expected to hear ‘Field Day’ or ‘International Day’ or, heck, even ‘Mud Day’, but instead, mostly I heard sweet little nothings like this:

‘…when the kids beg (me) to keep reading into snack/recess time…I love reading them with the kids so much.’

‘we get outside in the falling snow or warm rain with the kids or when the weather finally breaks in the spring and we can shed our jackets off.’

‘those spontaneous lunch days where we play music and dance!’

‘sled riding with the children… I hadn’t smiled that big in a while!’

‘the days nothing “big” is going on: the days when the birds are chirping, the breeze is blowing, laughter is in the air and creativity is flowing’

‘a hard rain… unbridled enthusiasm during a school visit’

‘sunny playing in the creek days. And board game days, those are a blast!’

‘favorite days are the ones with lots of laughter and smiles, aha moments as well as the days of “normal” learning!’

‘non-specific days, ones when just one single child says to you, “That was the best!” or “That was so much fun!”’

Now, look, most of those days aren’t eligible for this voting. (It’s a tall ask to rank ‘aha moments’ against Field Day or the Book Fair, after all) They won’t make the calendar of events or probably even the Instagram page most of the time, but they are our everydays here and while the featured events below are nothing short of spectacular, I thought they more than deserved to be acknowledged as well. Plus, man do I live up to being the softy on staff, but just compiling that list made me stand up and take a little walk to regain my composure.

Ok, shake it off, there is a silly competition I probably worked way too hard on to announce!

It’s time for the long-awaited (?) Best Day (@ Wheeling Country Day) Bracket! Let’s settle this once and for all…

‘I think it’s going to be tough getting to 24 days.’ I say as Miss Liz Hladek and I kick around yet another half baked idea in our kitchen a few weeks ago. Fast forward to a few days later and I’m here making the last of about 20 cuts to finalize a 36 day, five-round beast of a bracket with anything but predictable results ahead…while she pretends to stay awake as I debate aloud whether the Faculty Basketball Game should be a 4 or a 5 seed, oh and what about Dot Day? ‘We can’t leave Dot Day out, right? Maybe we need a play-in game…’

But before we kick things off, I want to give a little context to some of the choices and some of the inevitable snubs.

First, as you read above, there were a million sparkling moments (*cries again*) that could have been included, as well as some well known days like Pizza Day or Field Trips, but at some point, we realized the number of times we said ‘only if we need it’ probably meant we should put a bow on this thing. By limiting the number of cooks in the kitchen, I am prepared to take all of the heat from the Math Field Days and Cardboard Challenges of the world, so in a way, I’m really brave. Good for me…

Now it’s time to hear from you. As you vote, keep in mind that some of these ‘days’ are in fact plural, so while the Book Fair lasts a week, try to compile all that is great about it into a single event, even if that event doesn’t wrap up in 24 hours. Also, some of the names may not be what you called them before, but if you think that’s what we meant, we meant just that. Oh and finally, if you haven’t yet participated in one of these days or you’re new to the school, who cares!? Vote anyway! Don’t overthink it. I totally didn’t. I definitely slept well last night and didn’t wake up early today to make some last-second changes.

Starting tomorrow, we will vote daily on the WCDS Instagram and Facebook stories until 7:00 pm, which gives me just enough time to update the bracket before putting the kids to bed. Voting will continue through the weekend, with the winner announced Tuesday night, August 31th. Here’s how the schedule will work:

Simple as that! Now let’s also look at some key matchups and things we’re watching for in each region.

Most Anticipated Matchup:
The Play in Game between Miss Stella’s Pancakes and The Buche de Noelle via Madam McAteer.

It’s mono e mono, teacher vs teacher, sweet treat vs sweet treat, right off the bat for the pleasure of becoming lamb to the slaughter for our number one overall seed, Field Day, in the round of 32.

An instant classic, bound to be repeated newbie that definitely got dinged for lack of tradition going up against borderline favorite, the First Day of School.

Not that sledding and snowmen at WCDS should ever be considered ‘new school’, but I seem to remember staying inside on a cold day, cuddled in your comfy footie PJs was the talk of the campus, while last year we couldn’t keep the kids OFF MY GIANT SNOWFLAKE NO MATTER HOW MUCH I BEGGED!

I don’t know that we have any in this region, to be honest. I think we’re bound for a chalk 1 vs 2 matchup in the Elite 8.

Most Anticipated Matchup: (5) Valentine’s Day vs the (3) Egg Hunt.

People love those Valentine’s boxes, let me tell ya, but the Egg Hunt is a draw from preschoolers to teenagers and I loved that time when Mr. K hid a picture of himself inside the golden egg.

A fan favorite in hairstyles and silly outfits goes up against…Halloween.

Old School New School: (4) Martin Luther King Jr Day of Service vs (6) May the Fourth (be with you).

A longstanding tradition of giving on MLK Day was long the biggest way to spread our school’s footprint into the community, while May the Fourth is a punny take on Star Wars fandom gone mainstream in recent years.

Any whole school event, especially one with so many youngins getting to partake, especially one in the early spring when the sun is just starting to feel warm again, has a chance at a run.

If it happens in round two, it could be a barnburner. Summer Camp is the highest-ranked of the multi-day events, but International Day holds quite a place in the hearts of current students and alums alike.

On another day, in another bracket, this could make a real run, but looking at a second-round matchup against those 5th grade speeches, lookout.

One has been here for as close to 90 years as you can get while one is brand spankin’ new. Both are examples of the ability of WCDS to go above and beyond the traditional and create a true community.

I think this one depends on the audience. If voters have been to a middle school exhibition, we could be seeing the Cinderella story of the tournament. If not, it will probably be one and done for this new impressive feature at WCDS.

Joe Jividen Mutombo-esque blocks notwithstanding, the Faculty B-ballers are on a run rarely seen outside of the Globetrotters. But can they upset Santa and co?

This wonderful showcase, sometimes called the Talent Show, evokes the days of packed gyms and hot lights, but it’s up against the (6) Book Fair, everyone’s favorite chance to see me dressed as Clifford, buy dad a new screwdriver set, and snag a Garfield poster for yourself all before diving into a sea of Caldecott Medals!

While the ‘Steak Fry’ has been a feature at WCDS for quite some time, the newly minted Celebrate: WCDS is a relatively new take on the long-loved event. On the other hand, we’ve been getting out a little early for Winter Break since, what, A Christmas Story times?

You haven’t lived if you’ve never felt the thrill of seeing those giant metal cases rolled into your gym or library or media center! I think it has a shot at making a real run.

Alright, ok, that’s probably enough. The stage is set, the first day is done. Now let’s see what you’re all looking forward to in the next few months.

Remember, voting ends daily at 7:00 pm. Check out Instagram and Facebook stories to see how your favorites are stacking up!

Thanks for the time, everyone. Here’s to a year of little moments and big events, and to recognizing all the beauty in both.

*Oh and while I’m here. I wrote all of that, finished up some of the photo finding, and realized…BREAKFAST WITH THE ELVES! How could I miss Breakfast with the Elves!? I’m sure plenty of people will think of plenty of other days, but man, I blew it there. Sincerest apologies, ye tapered helix.